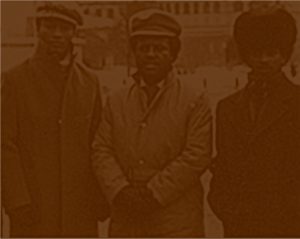 The paper will describe the dynamics of the Polish approach towards the Cold War Africa and present economic and political goals linked with the Polish policy on this continent. It will examine non-refundable support provided by Warsaw to national and revolutionary movements and show how African decolonization was used by the Communist mass media not only to inform the society, but also as a comparison to the contemporary political situation in Europe. The paper will look at the Polish policy in a broader perspective, trying to compare Warsaw’s involvement with other Soviet Bloc countries. It will also show that Warsaw Pact countries used to compete for African markets not only with the Western states but also with one another. Drawing on the declassified documents from the Archives of the Polish Ministry of Foreign Affairs, the PUWP, the Ministry of Foreign Trade, the Ministry of Defence, on the Communist Intelligence and Counterintelligence files, as well as Canadian and US declassified sources, I will address the question what the most important factors in the Communist government´s policy towards Africa were.

When the Soviet Union proclaimed its new Third World policy in the late 1950s, Czechoslovak Communist leaders were ready to follow it and to make the country the Soviet Bloc’s bridge to the Third World. In 1960s, Czechoslovakia became one of the most active socialist countries in Africa. It supported economically and militarily various newly established African states and local national liberation movements. Czechoslovak aid was accompanied with dissemination of propaganda journals, training of Africans, dispatch of Czechoslovak experts to African territory or active intelligence work. Although Czechoslovakia achieved several successes in Africa, since mid-1960s Central Committee of the Czechoslovak Communist Party was more and more sceptical about the overall goals of the African policy. Drawing on the recently declassified Czech sources, this paper will reconsider the aims, motivation and manifestation of Czechoslovak involvement in Africa in 1960s. It will also contribute to the understanding of interactions between socialist countries and the Global South during the Cold War.

Czechoslovak Experts in the Third World: The Case of the Military Technical College in Cairo (Mikuláš Pešta, University of Exeter)

Technical experts played an important part in the military and civilian assistance to the countries of the Global South, coming from both capitalist and socialist camp; and Czechoslovakia became an important exporter of the expert force. The first and the most significant of Czechoslovak specialists’ foreign missions was the Military Technical College in Cairo, which was operating from 1958 to 1977, reaching two hundred instructors in one academic year in the mid-1960s. The paper examines the position of the Czechoslovak expert community in developing Czechoslovak-Egyptian relations and reflection of the important events both at home and in the host country (e.g. the Arab-Israeli wars or the Soviet invasion of Czechoslovakia in 1968). It explores how the experts promoted Czechoslovakia and socialism, whether they tried to implement socialist ideas in the curriculum or in their lectures, and how they coped with the challenging living and working conditions. Furthermore, the study observes the expert mission as a contact zone between the expat community and the hosting society each having different culture, ideological background, educational system, military-scientific system, and suffering from mutual prejudices.

This paper offers a new interpretation of the significance of the 1956 Suez Crisis for Walter Ulbricht’s GDR. Egypt was the very first Third World country to sign an economic deal with the East German government in 1953. From then on, relations between the two countries assumed ever greater importance for the East German leadership. So much so that in 1956, while the cohesion of the Soviet bloc was threatened by the uprisings in Poland and Hungary and the precarious stability of the East German state itself was at risk, GDR leader Walter Ulbricht became preoccupied with the necessity of reaching out to the Arab Middle East. The picture that emerges from this analysis of the run up to and the immediate aftermath of the Suez Crisis is one of a constant pushing and pulling between East Berlin and Moscow in the summer of 1956, the former eager to reach out to the countries of the Levant, the latter convinced that such initiatives would quickly backfire.

Using recently declassified archival materials, this paper sheds light on one of Romania’s most impressive – and least known – tactics in its strategy of detachment from Moscow in the late 1950s; utilizing the country’s rich oil reserves as a currency for both economic development and political capital. By leveraging the country’s only comparative advantage to the rest of the bloc countries – its oil and extraction know-how – Bucharest was able not only to acquire Western technology crucial to its accelerated industrialization plans, but also to reach out to the non-aligned countries of Asia in a bid for international recognition and political prestige. This paper therefore explores the process through which oil was used in transforming Romania from an aid-receiving to an aid-providing country over the course of only a few years by considering the larger context of Romania’s desatelization strategy at the time.

Przemysław Gasztold is a research fellow at the Historic Research Office of the Institute of National Remembrance in Warsaw and Assistant Professor at the War Studies University, Department of Terrorism Studies in Warsaw. He is currently conducting research on Polish intelligence services, on relations between foreign policy and arms trade, on relations between Communist Poland, the Middle East, African countries, and on the ties between the Soviet Bloc and international terrorism during the Cold War.

Jan Koura is a senior lecturer at Charles University’s Institute of World History and a head of the Cold War Research Group at the Institute of the Study of Strategic Regions (Charles University). He has been a Fulbright-Masaryk Scholar at George Washington University and a Visiting Scholar at University of St Andrews. He is the author of one monograph, numerous articles and book chapter on the Cold War and co-author of a Cold War International History Project e-Dossier. His research interest focuses on propaganda and public diplomacy during the Cold War and Czechoslovak foreign policy towards the Third World.

Mikuláš Pešta is a post-doctoral research associate at the University of Exeter, where he works on the international “Socialism Goes Global” project. He focuses on the Czechoslovak relations to the Third World in terms of military cooperation, cultural campaigns and solidarity campaigns. In his PhD thesis, which has been recently published, he examined the European left-wing extremism and terrorism in the 1970s. He is a member of the Cold War Research Group at the Charles University.

Lorena De Vita is an assistant professor in the History of International Relations at Utrecht University and Co-Coordinator of the MA in International Relations in Historical Perspective. An award-winning teacher and researcher, her research focuses on the international history of the Cold War, on the international politics of the Arab/Israeli conflict, and on post-1945 European history and her findings were published in both academic outlets, e.g. Cold War History, and popular media, such as The Washington Post.

Corina Mavrodin is a Max Webber Fellow at the European University Institute in Florence, Italy, where she is completing her monograph on Romania’s foreign policy – and early strategies of detachment from Moscow – in the 1950s and ‘60s.  She completed her PhD in International History at the London School of Economics and Political Science (LSE), where she has taught several courses within the History Department, as well as a course on International Relations at the University of Beijing. Her current research focuses on Romania’s ‘exceptionalism’ as a satellite within the context of the global Cold War, and in particular, Bucharest’s early ties with the Third World through petro-diplomacy.

The workshop was supported by the European Regional Development Fund-Project “Creativity and Adaptability as Conditions of the Success of Europe in an Interrelated World” (No. CZ.02.1.01/0.0/0.0/16_019/0000734)

The workshop is co-funded by PROGRES Q 09: History – The key to understanding the globalized world