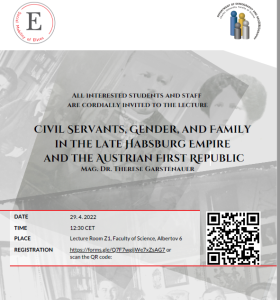 The Institute of World History hosted the lecture of

Dr Therese Garstenauer from Universität Wien. The English delivered lecture was hybrid and was dedicated to

Civil Servants, Gender, and Family in the late Habsburg Empire and the Austrian First Republic.

The tradition and legal framework of modern civil service stipulate a close connection between the personal and professional areas of life. Thus, gender and marital status of a person in civil service also had an influence on professional matters. In the lecture, the traditional division of labour in civil servants’ families will be traced to demonstrate how it became undermined with an increasing share of women in civil service since the second half of the 19th century. Drawing on examples from disciplinary files of the 1920s–1930s, it will be shown in how far traditional ideas about families were questioned or continued to exist.